Within the textile industry, readymade garments is the most labor intensive sub sector which has the lowest energy requirements. It is one of those exported products within textile which adds the highest value addition to the industry. The Readymade garment industry has emerged as one of the important small scale industries in Pakistan. The products produced by this industry has both local and global demand. The local needs are successfully met by this industry and large quantity of these garments are also exported to meet the foreign demand. The Readymade garments industry is a huge source of foreign exchange earnings for the country. The export earnings from the garments sector have increased significantly over the past couple of years (Economic survey of Pakistan, 2015-16). The quantity of the exports have increased from 23.704 million dozens to 24.823 million dozens from 2015 to 2016, showing an increase of 4.7% whereas the value of the exports have increased from $4.48 billion to $4.60 billion, showing an increase of 4.54% from 2015 to 2016 (table 1).

Garment industry is also a good source of providing employment and significantly contributes to creating well paid jobs and improving the trade balance. It contributes around 22.43% to the total exports of Pakistan whereas its contribution to the World trade is approximately 1.056% (table 2). The sector has great potential to stimulate economic growth and if properly positioned, is best suited to Pakistan’s comparative advantage.

The main focus of Pakistan’s exports have been on three major markets; USA, UK and Spain. In 2016, the exports of readymade garments to USA were $1.4 million, $0.6 million to UK and $0.4 million to Spain (Trade Map). This reflects around 58% of the RMG exports. The rest of the exports are made to European countries including Germany, Belgium, Netherlands, etc. Duty free access was granted to Pakistan in 2014 by European Union (EU) under its Generalized Scheme of Preferences (GSP) plus scheme and this is one of the reasons why European countries make it to the top five export destinations of Pakistan in readymade garments sector. 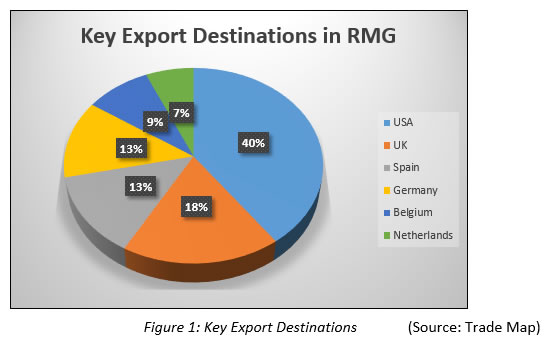 In December 2013, GSP plus status was granted to Pakistan by the EU. This status gave Pakistan 10-14% duty advantage over major regional competitors and granted member states duty free access to 96% of Pakistan exports to EU. The exports of the readymade garments industry in Pakistan increased by almost 10% from 2013 to 2015.

The figure below shows that the first two years of the GSP plus status had a positive impact on the exports of the readymade garments. From 2013 to 2015, Pakistan exports to EU increased by 11% per year whereas its exports to the rest of the world increased only by 1.5% per year. 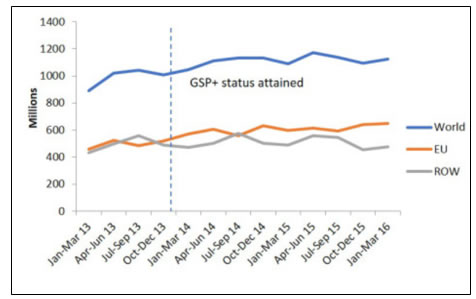 However, during the same time period, Bangladesh increased its garments exports by 13% while India increased it by 17% (IGC, 2017). Therefore, Pakistan was not able to fully realize the benefits of GSP plus status.

Globally, the demand is high for readymade garments as compared to goods based mainly on cotton. But when compared to its main competitors like Bangladesh, Sri Lanka, Vietnam, India and Turkey, Pakistan’s share in the export of readymade garments has remained very low. Although, the readymade garments industry of Pakistan has been facing a lot of challenges over the last decade due to number of factors like energy shortages, political uncertainty, poor security, marketing constraints, global recession and increasing competitiveness of other countries, but if the strengths and opportunities of this sector are properly identified, analyzed and reinforced, the sector has the potential to further increase its share in the global market and stimulate economic growth. 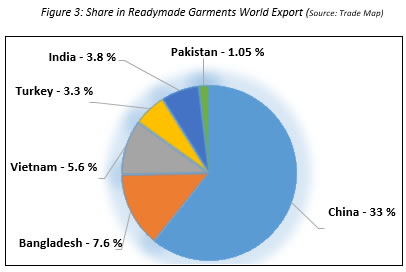